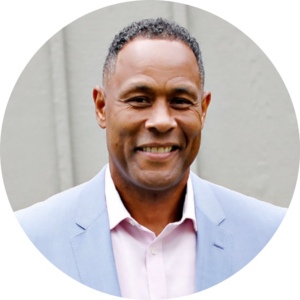 Richard Coffey is a native of North Carolina. He served three years in the United States Army as an Airborne Paratrooper, a member of the first to fight, last to fall 82nd Airborne.

Richard played basketball for the University of Minnesota Gophers. After graduating from college with a degree in business, Richard played professional basketball in Europe, Asia and in the NBA with the Minnesota Timberwolves. Following his basketball career, Richard worked as a leader in the corporate sales industry for over 20 years.

Richard is a dynamic and powerful speaker who is passionate about helping others reach the next level in their life, no matter what season they are in. He believes every person should have a personal strategic plan.

Through Richard’s background and experiences in the military, athletics and corporate America, he takes your audience on a thrilling, empowering and entertaining journey of self-discovery that is quite often described as life-changing. His wisdom and humor will enlighten and captivate everyone who has the opportunity to learn from him.